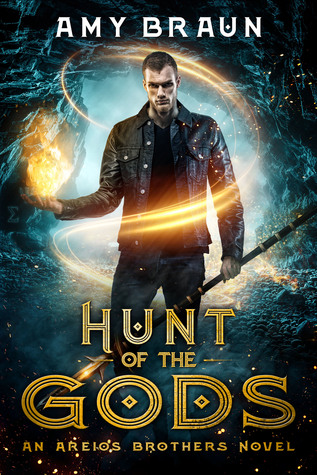 Hunt of the Gods
by Amy Braun

Two months have passed since Derek Areios—war-scion and heir of Ares—and the band of rogue scions he’s aligned with recovered both the Thunderbolt of Zeus and the Heart of the Devourer and returned them to the Gods. During the battle, Derek discovered he could control not only the element of fire, as all war-scions can, but also the dark element “aether,” making him the only scion alive to wield two types of elemental magic.

Commanded by Zeus to retrieve the Trinity Weapons and the Shards of Cronus, Derek and the rogue scions are thwarted in their goal by a gang of water-scions with a grudge against one of the rogues—Thea, heir of Poseidon. Both groups travel to an uninhabited island to recover one of the Shards––the Eye that belonged to Cronus, King of the Titans. But what they encounter will lead them down a path of brutal betrayals, hard truths, painful memories, and desperate actions.

With angry and impatient gods breathing down his neck, a curse that allows Ares to control him, a prophecy he’s desperate to avoid, a magic spear corrupting his thoughts, and two forms of elemental magic, Derek has a lot of baggage—and a lot of power. Will the price of using that power to satisfy the Gods be too much for him to pay?

Hunt of the Gods is the second book in this series, and wow I am loving this series so far! I definitely liked this one way better than the first.

Hunt of the Gods takes place two months after book one. War-scion Derek Areios and the rogue scions continue their quest to find the Trinity Weapons and the Shards of Cronus.  A LOT happens in this one,  I don’t want to give any spoilers, but if you do pick up this series you won’t be disappointed.  It was fast paced, action packed, and had great character development. The plot is clever and I LOVE all the twists. I think my favourite part was the Union of the Seas Festival, it was so unique and creative. Also, the politics among the gods was very intriguing.

Greek mythology has always been so interesting to me, all the stories I used to be told, and have read. I loved the Percy Jackson series by Rick Riordan, so I was soo excited when I saw this series, since I haven’t read any mythology retellings since that series was released.

I’m looking froward to reading more in this series, because OMG THE CLIFFHANGER!!! I really can’t wait for the next book!😍

I highly recommend this to those who like action-filled urban fantasy and a twist on mythology!

Amy is a Canadian urban fantasy and horror author. Her work revolves around monsters, magic, mythology, and mayhem. She started writing in her early teens, and never stopped. She loves building unique worlds filled with fun characters and intense action.

5 thoughts on “Blog Tour ~ Hunt of the Gods by Amy Braun: Review + Giveaway”