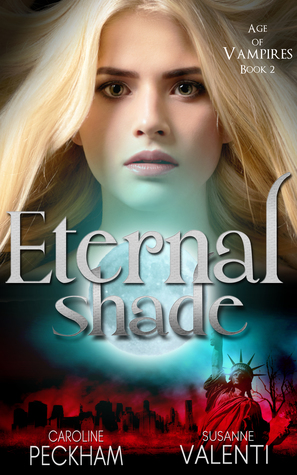 While Callie closes in on the blood bank in the hopes of rescuing her family, Montana accepts the dangerous task of spying on one of the vampire royals.

On the east coast more deaths arise in New York City and Montana soon realises she’s at the heart of an assasination plot. But if she doesn’t work out who her enemies are fast, she could be their next target.

On the west coast, Callie struggles with her newfound feelings for Magnar. And as she grows stronger, more capable and ready to bring down the blood bank, she realises her time with him could soon be up.

In the second instalment of the Age of Vampires Saga, two sisters must risk it all to protect each other and try not to fall for their dangerous companions along the way…

“That’s what I like about you, Rebel. Zero ass-kissing. Although if you fancy putting your mouth anywhere else on my body tonight, you only need to ask.”

I don’t even know where to start. Eternal Shade is the second book in the Age of Vampires series and continues the story of Montana and Callie. This novel was addicting, I read it in one sitting. It was such a good sequel, so well written and fast paced. So much happens in this book and it’s hard to figure out who’s telling the truth and who’s lying…🤔

The characters grow and adapt so much. Callie, the Daughter of the Sun, is steadfast in her journey to find the blood bank where she believes her father and sister are being held captive. She struggles between following her “duty” and training to become a warrior or following what her heart wants and finding her family–a classic conflict that ultimately pushes her to a breaking point. But her character grew more confident and seems to rely on fear instead of letting it control her.
Montana, the Moon Child, faces her own battles as she is thrust into the deadly game of vampire politics and is forced to face her new and unwanted feelings for a certain Royal. I was once again completely captivated by Montana’s story of deceit, uncertainty, and surprises. Montana faces new threats on her life while attempting to uncover just what the vampires want with humans in the first place–an unsettling reality that also pushes her to a breaking point. She’s my favourite out of the two, she’s strong and brave, and her character has lots of depth.

“If he kisses me it will break my heart when he leaves. If he doesn’t kiss me I don’t think I can bear it.”

This whole story-line is so unique, and the creativity behind the characters and the plot is just great! That’s why I’ve really been loving Caroline’s books, they’re so different and unique, she is definitely an author to look out for! I’ve never read anything from Susanne, other than this series so far, but I’m looking forward to more from her.

This series is something to look out for… SERIOUSLY. That cliff-hangar, got me so shook. I’m sooo looking forward to book 3, Eternal Curse. I WANT MORE!!! haha I highly recommend it!

Caroline Peckham is the author of The Rise of Isaac Series and upcoming V Games Trilogy.

Caroline lives in the south-east of London with her best friend and a little rescue cat. When she’s not writing, she’s binging Netflix shows, going to the gym or at the pub pretending to be cool.

Susanne Valenti lives in Kent, England with her husband Richard and their daughter Riley and son Roman. She has two cats and has worked in animal rescue as well as the family business. She enjoys all things fictional and wants to create stories that give the reader a real sense of love, friendship and adventure with a good twist of the unknown thrown in.

I haven't posted something in forever, but I thought I'd share this, since it just came out. I'm so excited right now! ✨ #book #newrelease #newbook #bookish #bookstagram #booknerd #booklover #currentlyreading
All of my choices had been stripped from me except for one.⁣ ⁣ Dance or die.⁣ ✨ @brynnfordauthor is back with an all-new series! Book 1, Counts of Eight is coming on May 31st and you can pre-order it today ➞ https://books2read.com/u/3k1krO?store=amazon⁣
Freya thought her fight was over.⁣ She was wrong.⁣ ⁣⁣ DARKNESS is the fifteenth and final book in the Freya Snow urban fantasy series, which starts out as YA and follows Freya’s magical adventures through to university and into adulthood. If you like kick-ass, sarcastic heroines, immersive magical worlds beneath our own, and love that crosses the lines of magical feuds, then you’ll be instantly hooked on @lcmawson’s fast-paced urban fantasy series. ✨ Get your copy today ➞ https://amzn.to/3aJBf4w⁣ ⁣
I couldn’t escape the hard sins of my past.⁣ ⁣ I couldn’t unsee the truths in my mistakes.⁣ ⁣ Every breath she took was a reminder of the pain I’d caused.⁣ ⁣ Growing up at the mercy of a madman, I swore I would never give anyone that kind of power over me again. But here I was, on my knees, begging for a life I lost.⁣ ⁣ Except no amount of forgiveness would bring it back.⁣ ✨ HARD TRUTH is the fourth book in the Alpha Antihero Series by @sybil.bartel coming May 18th! Pre-order your copy today ➞ https://books2read.com/u/mYpWvo?store=amazon⁣ • • • #bookaholic #bookshelves #bookblogging #booknerd #bookgram #ReadersOfInstagram #romance #sybilbartel #AlphaAntihero #HardTruth #XpressoTours @XpressoTours #bookishlove #booksofig #bookstagramfeature #bloggerstyle #bloggersofinstagram #bookblogger
Shifters and humans don’t mix … ⁣ If you love snarky heroines, forbidden romance, and shapeshifters, pre-order Trouble with Wolves by @coffee_and_characters today ➞ https://books2read.com/u/mBgx5p?store=amazon⁣ ⁣⁣⁣✨ More info on my blog! Link in bio~
Leo Spearman cares about one thing: getting a cure for Gaeth’s “Steel Elbow”. Yet, when they decide to leave Earth to cure him, they realize they may have to break galactic law to get it. Leo believes everything is going according to plan but when their new ally Sonja comes along, Leo becomes more and more dedicated to the resistance, a group set on stopping the Sol Empire from taking over the galaxy. As Leo and Sonja’s connection starts to grow, Gaeth begins questioning his brothers’ dedication to finding his cure.⁣ ⁣ Across the galaxy, an alien named Tank is determined to win The Ceremony, hoping to find out what happened to his father, who won before him. Only when he finds his answer, he is forced to escape his home, losing his hand in the process. After being saved by Enzu, she equips him with an arm cannon, the only expense being to work for her and protect a small boy named Myca at all costs. Tank is grateful of Enzu for saving him, but the more time he spends at Bisekt, it makes him question everything and who to trust.⁣ ⁣ However when an outside threat forces Leo and Tank to work together, they’ll discover if they’ll be able to save the ones they love or if it’s already too late.⁣ ⁣✨ Metal Bones by @kathleen.contine.author is an all new new adult sci-fi coming on March 17th! Add it to your Goodreads today ➞ https://www.goodreads.com/book/show/48904361-metal-bones⁣⁣
Single dad. Computer geek. One-night stand. Not looking for love. That’s how my profile reads.⁣ ⁣ And I was getting away with the whole no girlfriend status, Until Payton Tucker showed up...⁣ ⁣✨ USA TODAY Bestselling author @kellygendronauthor, now brings you the Shameless, Sexy and Daring Kane Brothers! Get your copy of NIX today for only 99¢ (limited time only) ➞ https://books2read.com/u/mYKMwd?store=amazon⁣ ⁣⁣⁣⁣✨ EXCERPT + GIVEAWAY + More info on my blog! Link in bio!
Owen has to fight to protect the woman he loves, and their future together, or risk losing everything.⁣ ⁣✨ Hanna Dale's debut novel, My Pulse, is now available for romance lovers! Download it to your kindle today ➞ https://books2read.com/u/4NQJzN?store=amazon⁣ ⁣✨ Excerpt + Giveaway + More book info on my blog! Link in bio~ ⁣
Fresh out of an abusive relationship, Tatum packs up and goes to live closer to her brother. ⁣⁣ A new life. New beginnings. ⁣⁣ But when Parker – her college sweetheart – comes back around she’s immediately divided between trying again or protecting her damaged heart. ⁣⁣ ⁣⁣✨ It Was Always You by @slsterling is on sale for 99c for a limited time! Download it today ➞ https://books2read.com/u/bQao1E?store=amazon⁣⁣ ⁣
They say not to judge a book by its cover. It’s what’s on the inside that counts. But what if what’s on the inside could get you killed?⁣ ⁣⁣✨ Give up the Ghost by @_debbiecassidy is available now! A kick ass Urban Fantasy Adventure filled with fey, demons, vampires, gargoyles and golems! Get it FREE on #KindleUnlimited ➞ https://books2read.com/u/bzvwoZ?store=amazon⁣ ✨ Teaser + Giveaway - More info on my blog! Link in bio!
Falling for the forbidden has never felt so right… ✨ Steamy, touching, heart-warming. A much-needed #OwnVoices romance to go perfectly with that plate of chocolate brownies and glass of wine! A Perfect Mistake by @a_laurabrown is finally here! Get it now ➞ https://books2read.com/u/mVr0Wl?store=amazon⁣ ✨ Excerpt, giveaway + more info on my Blog! Link in bio!
He's unreasonable, demanding, & rude!⁣ ✨ Get ready for some boy candy in British Banger by @authorjenniferwoodhull! This book is part of the @cockyheroclub, books written in the world of Vi Keeland & Penelope Ward’s Cocky Heroes! Add it to your Goodreads today ➞ https://www.goodreads.com/book/show/47887971-british-banger⁣ ✨ Giveaway + more info on my Blog! Link in bio!