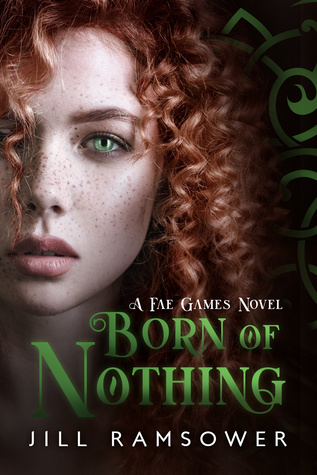 Born of Nothing
by Jill Ramsower

It was over before it began.

A druid woman and a Fae man—we were two people from different worlds, only by chance did our paths happen to cross. He was beautiful and damaged and totally captivating. If only I could have continued to buy into the propaganda of fear and hate my people had taught me about the Fae, then maybe I would have believed him to be the savage he appeared to be.

Instead, I offered the cryptic man my help. The time I spent with him allowed me to see the man he was behind the chiseled, formal exterior. What developed between us was tender, intimate, and totally unexpected.

My druid family was not as enlightened as I was. My mom didn’t want me near the Fae; she certainly never would have understood that I had developed feelings for a Fae man. I tried to keep my private life a secret. I tried to keep the peace, but my mother’s threats and intolerance left me with no choice. I had to make the hardest decision of my life. I had to leave the only family I’d ever known. I just never imagined what I’d face when I didn’t make it out in time…

After reading the first three books in this series, I was definitely looking forward to this one.

Born of Nothing is the fourth book in the series and features some familiar faces and some new faces as well. I would consider this a stand alone novel, you don’t necessarily have read the first three books to follow this, but you do get to know the characters more intimately, plus the story just makes a bit more sense.

Born of Nothing follows two characters that we’ve already meet in the previous books, Fen and Cat, although they hadn’t actually met one another until now…  I’m so glad these two characters got a book in the series, I’ve wanted to know more about them since we first get to know them in Fae Games Duet.

Fen has been exiled and living in the Shadow Lands for centuries in solitary, until Rebecca helps him escape to our world. But since he’s being stuck in the Shadow Lands for so long, he has some adapting to do. But with the Queen’s people now in Ireland Rebecca to lay low, she doesn’t want to risk a war between the Seelie Court and the Hunt, so she asks her colleague and friend Cat to look after Fen for a while. Cat is hesitant at first, because she comes from a druid family and was taught to fear the fae, but since Rebecca was a ‘made’ fae and a very good friend she decides to help, and has to lie to her mom in the process of helping Fen. She visits him every week and they quickly become close…. but their romance was cut short…

I’ll have you know that this is NOT your typical romance book… it’s quite different… and definitely not like the others in the series, it’s a bit darker and even more intense. I wasn’t expecting it and took me by surprise. Poor Cat. She suffered so much. I felt so bad for her… I can’t believe that her own mother would approve of such a thing.  *sigh*

Born of Nothing was heartbreaking, terrifying and extremely well written. It’s a good addition to the series and I’m looking forward to reading more in this world. This series is brilliant and definitely worth the read. I recommend it!

Jill is a Texan, born and raised. She manages the hectic social calendars for her three active children and occasionally spends an evening with her dashing husband. Aside from being an author and a mom, she’s an attorney, travel junkie, and voracious reader.

3 thoughts on “Blog Tour ~ Born of Nothing by Jill Ramsower: Review + Giveaway!”