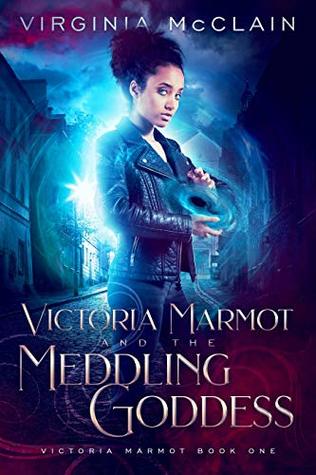 Victoria Marmot and the Meddling Goddess by Virginia McClain

Victoria Marmot is just an average teenage girl… if by “average” you mean an orphaned, multi-lingual, martial arts expert who owns her own home and may or may not have magical abilities.

When Vic is told her parents didn’t die the way she thinks they did, her world is turned upside down and she’s left with the task of finding out what really happened to them. But when her quest to uncover the truth reveals a massive conspiracy by a corrupt magical government, will her efforts save the world or take the whole universe down with her?

*a copy was provided by the author, via NetGalley*

Victoria Marmot and the Meddling Goddess is … a difficult one, I don’t even know where to begin.

I don’t know what I was expecting with this one, I honestly thought it would be different. I actually liked it. And it reminded me of Twilight sooo much. I mean, Victoria moving into a new place, going to a new school; where on her first day, she meets Edik, in her physics class, this is her first impression,

“Not only was this guy’s accent decently inappropriate for Arizona, but his manner of speaking was entirely wrong for this century.’

Which made me think, he’s totally a vampire, but the thing is he says something, that I swear Edward said to Bella…like seriously exact words..

“It’s not that. It’s your smell. You smell different. And I can’t tell what you’re thinking.”

I know right? It’s VERY similar. And Edik even follows her home and tries to watch her sleep…and he has diamond teeth or rather his skull is made out of diamonds… which I guess also means all his bones are made of diamonds… which honestly only made me think of Edward shinning like a diamond in the sunlight. LOL It’s great.

Let’s not forget about Seamus, the hunky werewolf.. at one point him and Edik fight about Victoria, which, again reminds me of Twilight..

At one point I loved Twilight, and this kind of brought back good memories of it… It makes me want to read the series again tbh. And NO! its not a ‘retelling’ of Twilight, its actually way different, and hilarious, but the similarities are there.

If you want something lighthearted and humorous or something upbeat and fun, then I recommend this.

Virginia McClain is an author who recently stopped daylighting as a Spanish teacher in Arizona and switched to writing full time in Winnipeg, Manitoba. When she’s not writing she can often be found climbing to the top of large rocks, running on trails, backpacking, and generally engaging in any excuse to go play outside. Now that she has moved to the Great White North she will probably add snowshoeing, cross country skiing, and ice skating to her list of outdoor adventures, but as it’s still warm out she’ll start with canoeing (something she hasn’t done in years) and see how it goes from there. She lives with her husband and their furry, canine companion Artemis.