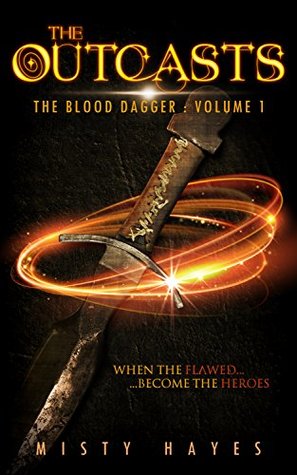 The Outcasts – The Blood Dagger: Vol 1 by Misty Hayes

It’s hell being a teenager.

Larna Collins has never understood why her dad skipped out on her and her mother when she was twelve years old. Until then, he was a devoted and loving father.

But six years later, during a renovation of her childhood home, she unearths her father’s journal from under a dusty floorboard. According to his final entry before he left, he had recently visited a small parish in England.

The entries draw her to this seemingly quaint village, which Larna discovers isn’t as charming as its blood-craving inhabitants want her to believe, and she learns that she isn’t the only one trying to track her father down.

Could this explain her father’s disappearance? Or was placing her in the center of danger her dad’s master plan all along?

Not what I expected! I’m actually really surprised with this one! This is the first Misty Hayes book that I have read.  I loved it. I am looking forward to the next book.

Larna Collins is on a search for her father, who disappeared when she was just twelve years old.  Her search brings her to Bromham, London.  Larna quickly learns that there is more to her father’s disappearance than she thought.

The book is action packed to the brim leaving you on edge the whole time. It’s one of those books that you can never get bored of because there’s always something happening that’s relevant to the story, and with all the secrets you’ll find throughout the chapters it keeps you hooked until the very last one.

The Outcasts holds a huge twist that I don’t want to spoil, but it’s full of secrets, betrayal, action, and love. I really like Larna’s character and feel terrible for the bullying she’s suffered from. I highly recommend it!

Misty Hayes has always had a thing for escaping headfirst into fantastical books. This is what led her to start writing her own adventures down. As someone who has spent a long career in law enforcement, Misty has a love for strong female protagonists. She also directs short films and claims to have been bitten by the traveling bug (not to be mistaken for a radioactive spider).

When Misty isn’t filming or roaming the planet, or diving into another novel, she’s spending time at home in Texas with her myriad of nieces and nephews in tow.

4 thoughts on “{Review} The Outcasts – The Blood Dagger: Vol 1 by Misty Hayes”