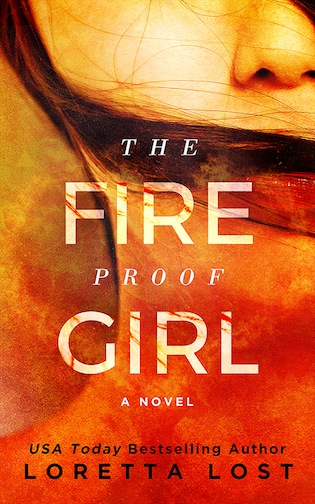 The Fireproof Girl by Loretta Lost

Abandoned at birth, Sophie Shields grew up in abusive foster homes, escaping into books and computers for solace. When the constant danger became too much to bear, she ran away, thinking she could survive on her hacking skills alone.

That was until she met Cole Hunter. He became the only person she could trust: her family, her friend, her partner-in-crime. Her everything. After struggling through college and starting their lives together, she believed that nothing could ever tear them apart.

And she’ll do everything in her power to fix what is broken. If it isn’t too late…

When Cole was nine years old, he watched his whole family burn to death in a house fire. Fueled by years of obsession, he started one of the world’s leading architectural firms, with a mission to design homes resistant to fire, earthquakes, floods, and every threat known to man.

Sophie was his secret weapon. She was his purpose. Since they were teenagers, he was determined to build a better life for her, so she could finally be safe, and they could be together.

But disaster has always followed Cole around, ripping away everything he loves. This time, if he isn’t careful…

The Fireproof Girl is the story of Sophie Shield and Cole Hunter. Sophie, is a CIA agent and an excellent code breaker, who lives in Washington DC with her boyfriend Zachary. One day she reads in the newspaper that, Cole, another homeless child, adopted by same foster parents as hers, who she has not met in years, is dead. She decides go back to California where, Cole lived to find out who his murderer is. Through Sophie’s perspective we get to see her on a journey of searching for clues surrounding Cole’s death and who shot him. I really liked the dual perspectives between Sophie and Cole. Sophie’s side of the story was told in present day (2016) while Cole’s side dealt with their past (2003) and how it’s has contributed to their present. Both were broken children who grew up to be broken adults. In the beginning you know that Sophie has a problem with commitment and you slowly find out why. I felt the author did a pretty good job of weaving the backstory for both Sophie/Scarlett and Cole.

The story was compelling, interesting, disturbing, intense and I loved it. The plot was interesting it was full of twists. You don’t really know what is going on. The story will keep you guessing. It’s really fun to follow Sophie through the past and present with unexpected events unfolding.

If you like mystery, suspense and a bit of romance. This is the book for you. I don’t usually read mystery type books, but I’m can’t wait to get my hands on the rest of the series.  I highly recommend it.

USA Today bestselling author Loretta Lost writes to experience all the love and excitement that can often be lacking from real life. She finds it therapeutic to explore her issues through the eyes of a different person. She hopes to have a family someday, but until then her characters will do nicely.

Follow @loretta.lost on Instagram for cute photos of her cat reading books. He refuses to cooperate unless they are really good books.

You will receive a FREE book as a gift for signing up!